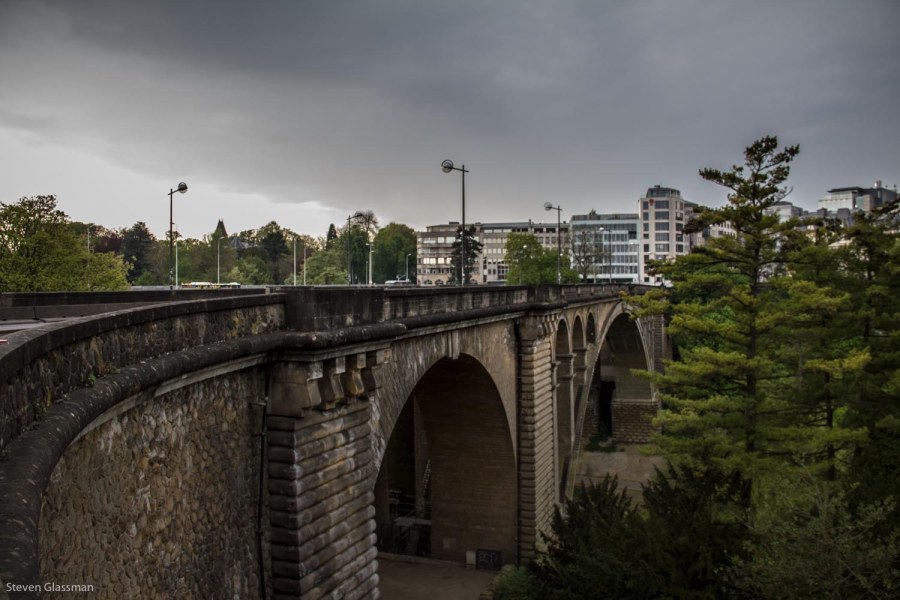 My trip to Belgium concluded with a one night stay in Luxembourg City so that I would have a little bit of time to check out the place.   My hotel was directly opposite the train station, and I already posted a night-time view from this vantage point, because this was the night of the Sport Lisboa e Benfica win.   It was much quieter in the daytime.

The topography of Luxembourg City is kind of amazing-  the entire city is constructed around gorges and ravines.  If you’re a fan of interesting bridges, this is the town for you to visit.  If I’m not mistaken, this one is the Passerelle, also known as the Luxembourg Viaduct.

This is Luxembourg’s Notre-Dame Cathedral.  I knew there were a few Notre-Dame cathedrals, but I didn’t know before I looked it up that there are actually more than thirty.  I’ve seen three of ’em now.  I’m gonna collect the whole set! (Kidding…) 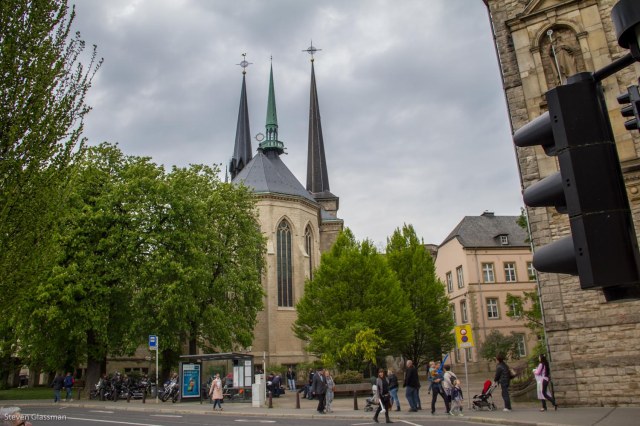 In Constitution Square, as you’re heading into the old city, there’s a war memorial called The Monument of Remembrance.  The locals have nick-named it Gëlle Fra, which is Luxembourgish for “Golden Lady.”  The monument is dedicated to the Luxembourgers who served in the armed forces of the Allied Powers during World War I.

Interesting side note:  The first time I heard someone refer to Luxembourgish as a language, I thought they were joking.   Luxembourgish, I have learned, is a derivative of Franconian German which is spoken by about 400,000 people worldwide.    Most of them, naturally, are in Luxembourg.  Fascinating!

Walking through the city, I found myself in a large square called the the Place d’Armes.  There were many restaurants and shops around this square, but there was also, somewhat randomly, a band visiting from Britain!  The Young Ambassador’s Brass Band of Great Britain. 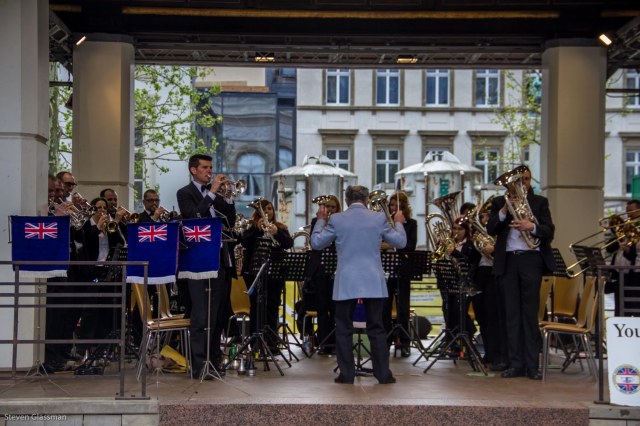 After I enjoyed the live music for a little while, I kept wandering.  I found the Grand Ducal Palace without much difficulty.  Large crowds of people make things easier to spot.

When I got closer to the Grand Ducal Palace, I noticed a lone guard marching back and forth in front of the gate.   There were two of these blue guard boxes, and I wonder if the Luxembourg guard does as the Queen’s Guard do at Buckingham Palace:  Two sentries when royalty is in residence, and one when royalty is out of town. 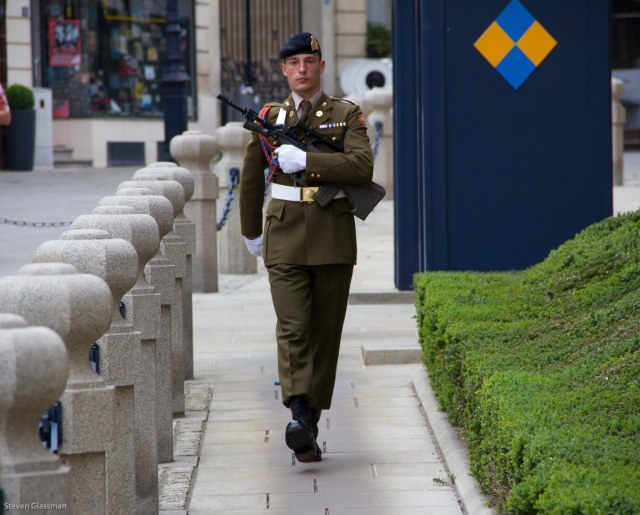 Walking further, I found a  theater with a nifty set of drama statues out in front.  Unfortunately, this was the beginning of the part of the trip where I got completely lost.  Despite my travel experience, this still happens to me sometimes.   When I’m in the heart of an old city, my sense of direction isn’t always the sharpest and I can get pretty turned around.    This never happens to me when I’m in Florida, even when I’m in an unfamiliar part of the state.   I don’t know precisely why this is.  In any case, I kept walking in the same direction, because I thought I was heading back toward Constitution Square.

By the time I realized I wasn’t where I thought I had been going, I was several kilometers away from the place where I knew which way was which.   Lucky for me, this was also the point at which I found one of those Hop-On/Hop-Off bus tours.  I Hopped On.

Most of the bus tour was uninteresting to me, but I did quite like seeing The Tall Banker.  The Tall Banker, set in front of the Deka Bank, has the waist of a normal person, but he’s eight meters tall.

From the bus tour, I also saw the Walking Flower sculpted by Fernand Léger in 1951.  I don’t know if this is the original one, because I saw the exact same sculpture two weeks later in the Hague.   This statue (or copies of it) have traveled the world, and one was even displayed in Manhattan.

After I Hopped Off the tour bus, I walked back to Pont Adolphe.  I had actually been trying to find this bridge when I got turned around and subsequently lost, and it turned out to be very close to where I started out in the first place.  It was also closed to traffic for repairs, but that didn’t stop me from wandering out onto it.

Have you ever visited Luxembourg City?