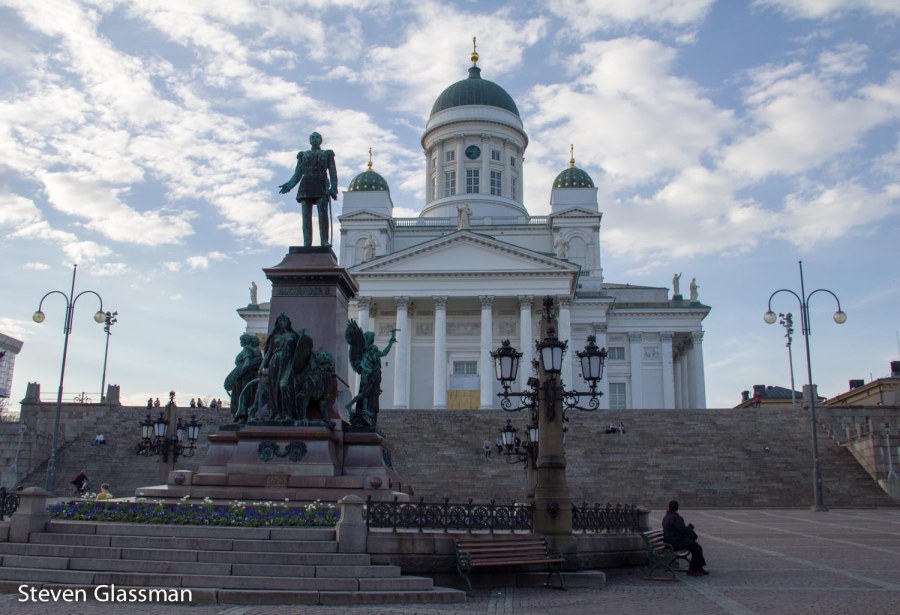 I scheduled a bunch of time off for another trip that didn’t quite pan out, so I decided to use the time to visit Helsinki, Stockholm, Oslo, Copenhagen, and Reykjavik.  I started my two week romp through the Nordics with a day in Berlin, where I checked off the last three Category One stations and attended a concert by Hayseed Dixie.  The next day, I flew from Berlin to Helsinki, Finland.

My pictures from Helsinki are in no particular order.

This is the statue of Alexander II and the Lutheran Cathedral, as seen from about a third of the way into Senate Square.    If you do a Google Image search just on the word Helsinki, the Cathedral is going to be the single most common image.  It’s pretty well known. 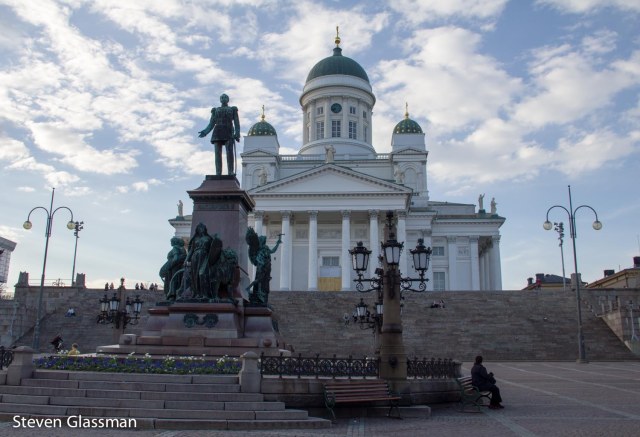 This is Esplanade Park, a short walk from the Harbor.  The statue is  J.L. Runeberg, the national poet of Finland.  This park is a meeting point for locals and tourists, and there are free concerts here during the summer. 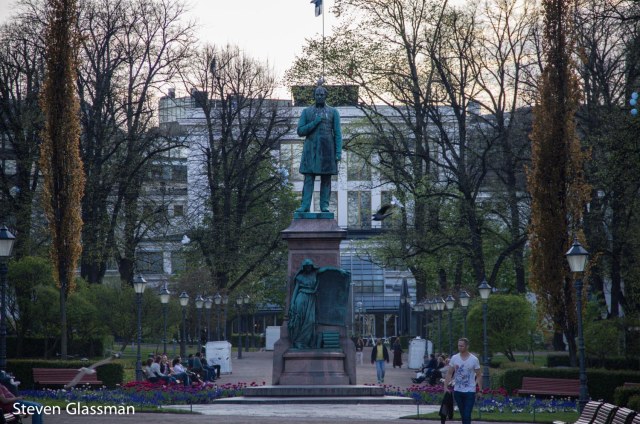 A convergence of tram lines near the harbor. 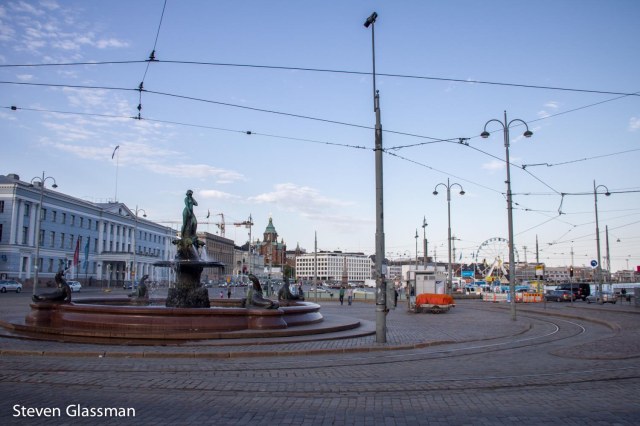 Uspenski Cathedral, the  Russian Orthodox behemoth of a church on the hill in the background, is walking distance from the Harbor. 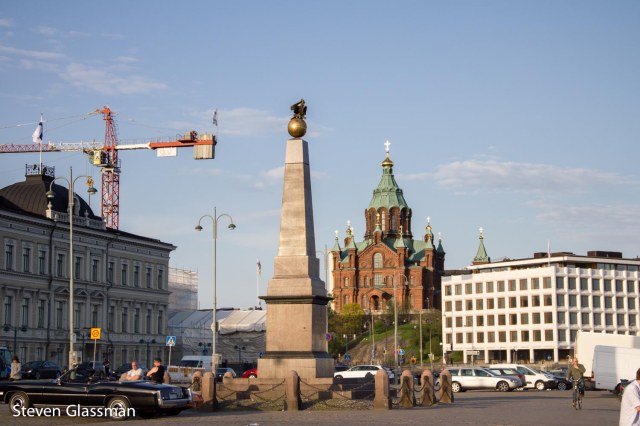 Helsinki City Hall, I think.   It’s possible that I made the wrong assumption here. 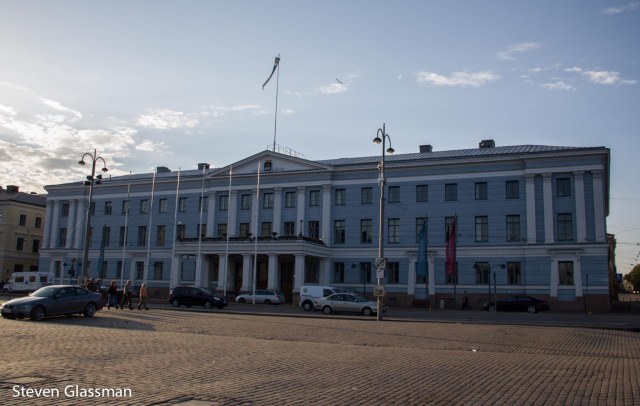 Uspenski Cathedral again, this time from a bit closer.  Uspenski is the largest Orthodox cathedral in Western Europe. 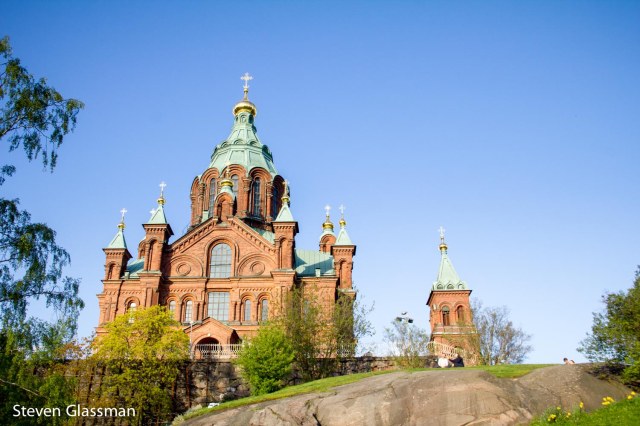 I quite liked the feel of Helsinki.  Any city that puts out paired lounge chairs for its citizens can’t be all bad, you know?  I didn’t try out these chairs, but I should have. 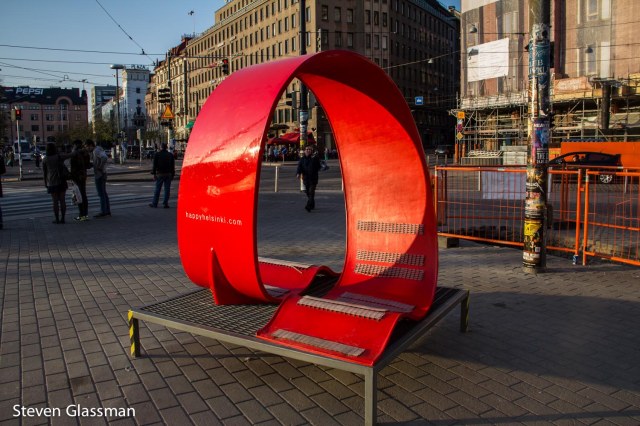 The railway station.  I walked through this building to see the inside, but it wasn’t as impressive as the front.  This totally looks like it could be used for establishing shots in the upcoming Justice League movie, don’t you think? 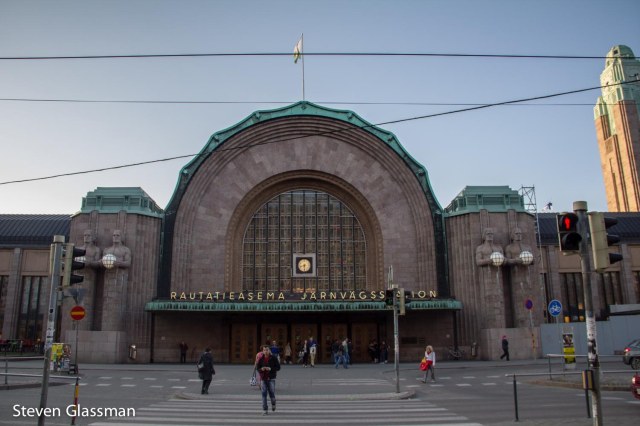 Completed in 2012, the Kamppi Chapel of Silence in Narinkkatori square isn’t really a church.   It was designed by architects, and is built out of wood (Alder, spruce, and ash, according to the signs.)  It won the International Architecture Award 2010, and is part of the World Design Capital Helsinki 2012 program.

Inside, the sound of the city is blocked out, and it’s muted and quiet-  something you might expect from a place called the Chapel of Silence.    This is only a kilometer from Senate Square, so it’s easily reachable on foot or by tram. 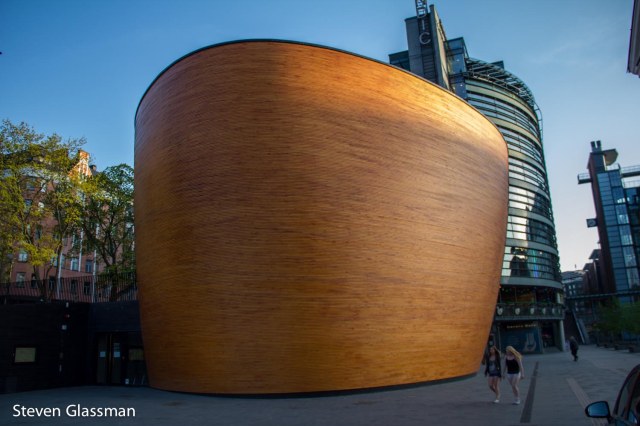 I had never heard of Moomins before this trip.  This is yet another instance of the United States completely and utterly missing a swath of culture from other places.  The Moomins, created by Swedish speaking Finnish auther Tove Jansson, have been cartoons, comic strips, stage shows, movies, novels, and even a theme park.  They’ve had exposure in England, Russian, Japan, Austria, and Cuba… but until this trip, I’ve never seen a Moomin.  The Jansson family has turned down offers from the Walt Disney Company, so that explains some of my lack of exposure. 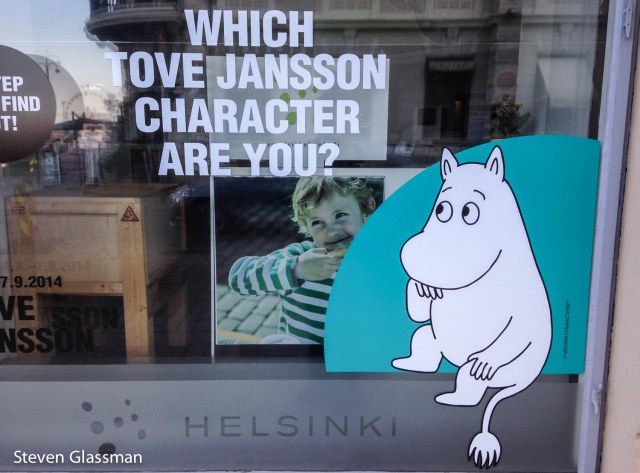 The Three Smiths statue, unveiled in 1932, is another popular meeting place for locals.  Also, it’s directly in front of the Hard Rock Cafe, if you’re into that sort of thing.  I actually ate at Kaarna, another restaurant nearby.   I had a delicious reindeer burger patty with braised onion and salad wrapped in Laplandish flatbread. 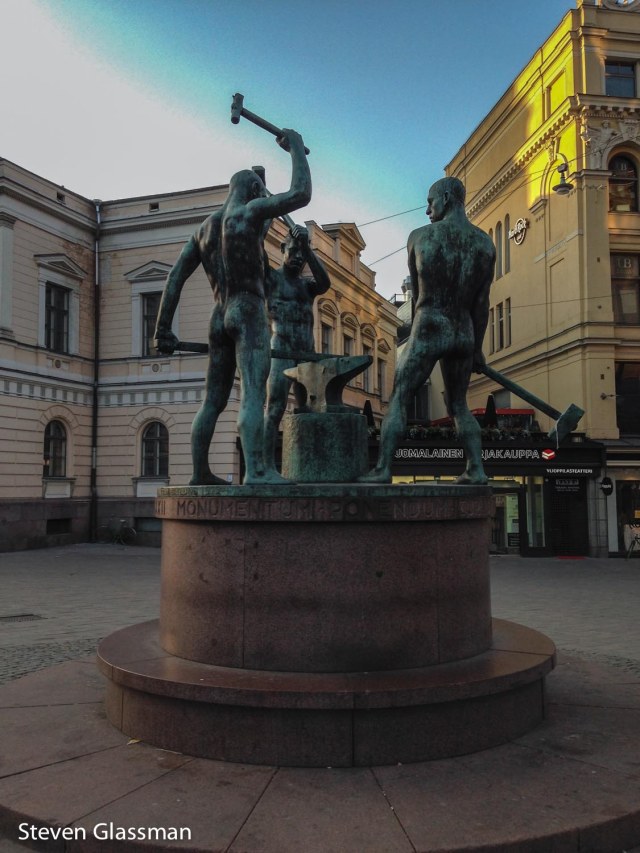 This sculpture still bears damage from being shot during World War 2. 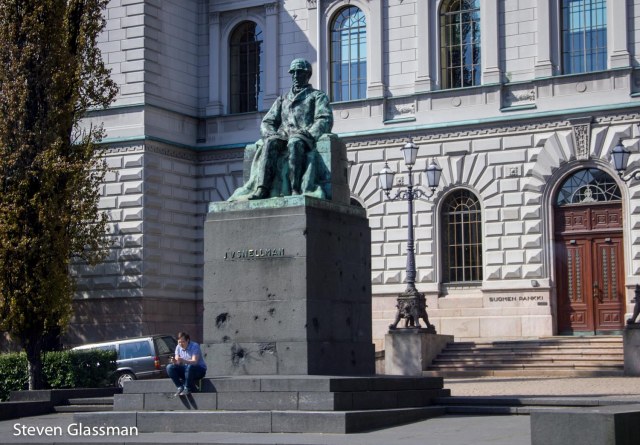 The Church in the Rock, or Temppeliaukion kirkko, was blasted out of granite bedrock. 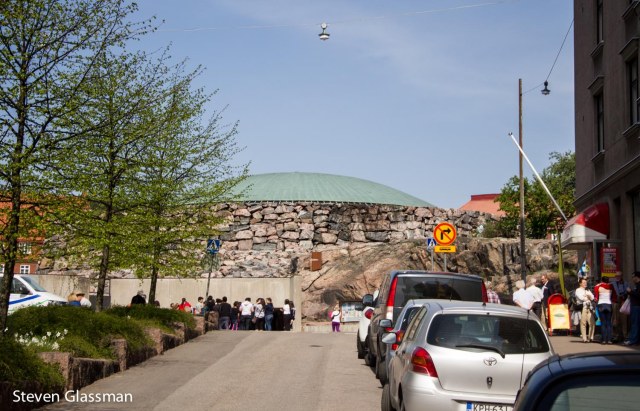 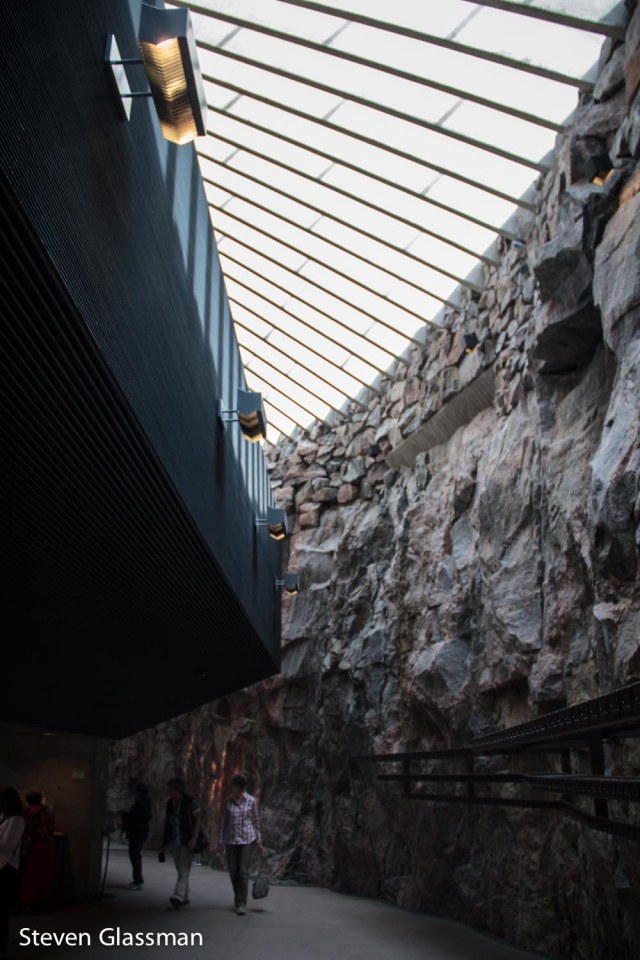 The ceiling is entirely made of copper. 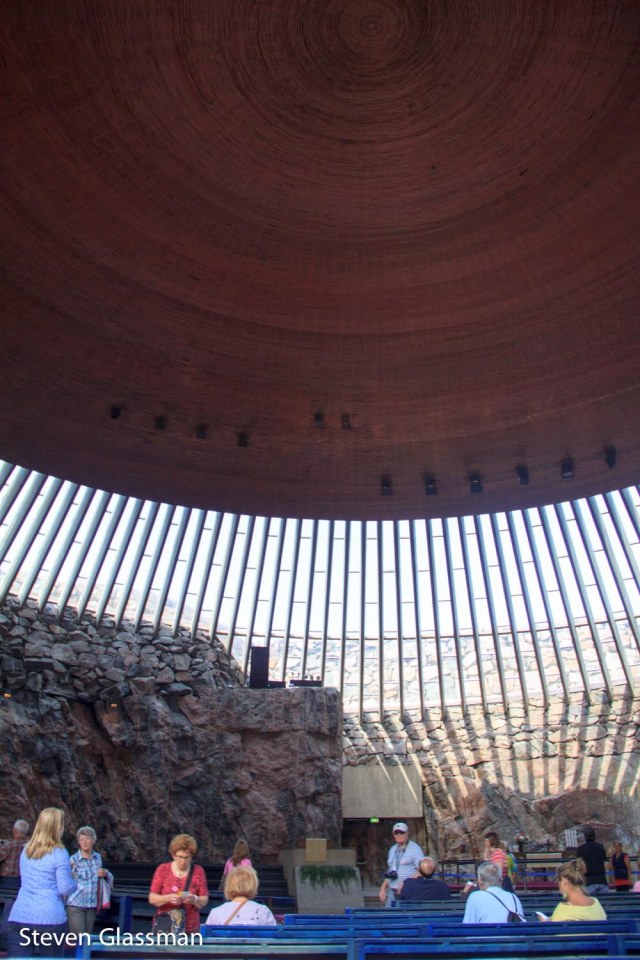 The Jean Sibelius Monument in Sibelius Park.  This was created in 1967 by Eila Hiltunen.  The intension was for visitors to interact with the design by creating sounds and echoes in the pipes. 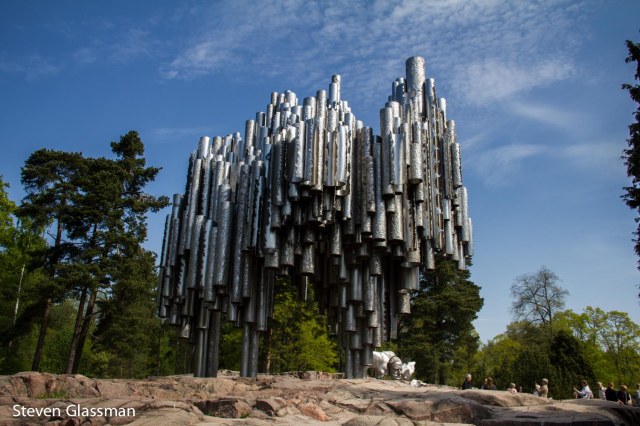 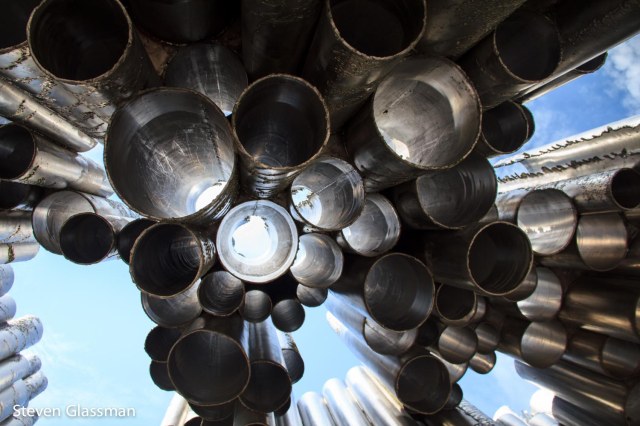 This statue is called “A Mother’s Love.”  I thought it was nice. 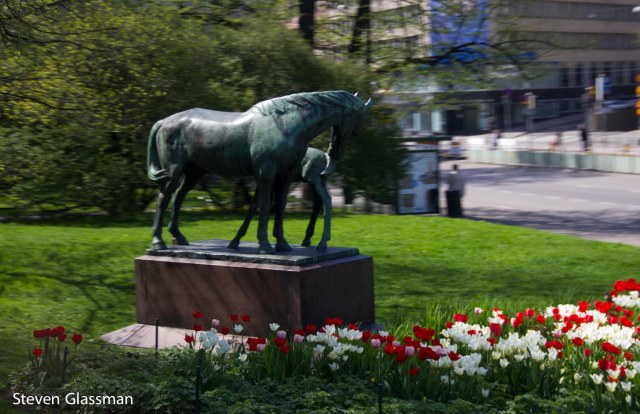 Harborside Market, in Katajanokka.  Here you can buy crafts and local foods. 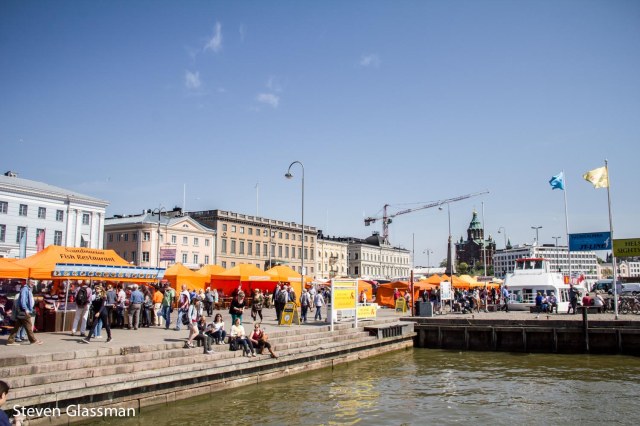 The Helsinki Pool and Ferris Wheel isn’t open yet-  It was slated for Spring of this year, but the 40 meter tall ferris wheel wasn’t open when I was there. 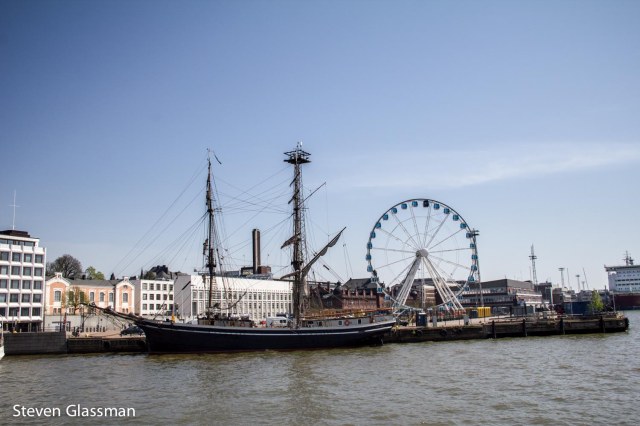 Suomenlinna could easily be separated into a separate blog post, because it’s an on a different island.  Suomenlinna is a sea fortress built off the coast of Helsinki in the mid-1700s in order to defend the city. The fortress is well preserved and is a frequent attraction for tourists, but the island is also home to around 800 residents. There are tour boats that go to Suomenlinna, but you can just easily reach the island using the HSL ferry-  if you’ve already purchased a day-ticket good for all the buses and trams, you’re covered for the ferry to Sueomenlinna as well. I purchased a multi-day ticket at the airport, and it covered me for the entire trip. 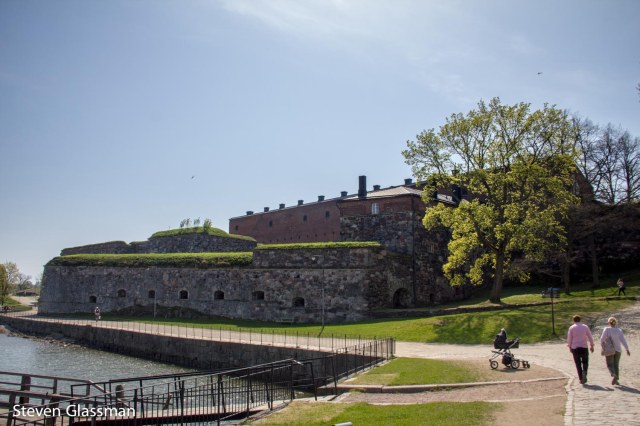 On the walk in the direction of the King’s Gate. 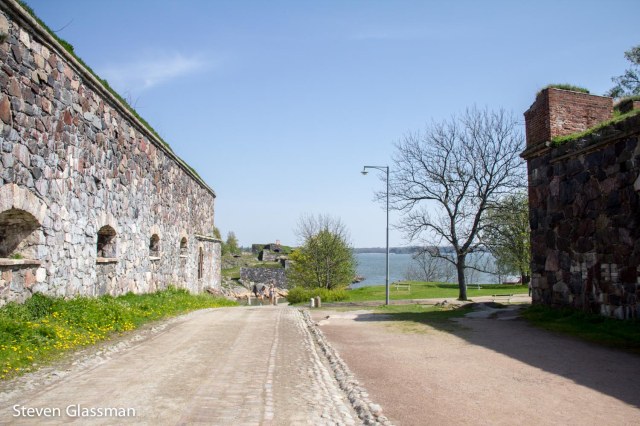 Kustaanmiekka is part of the original bastion fortress with guns constructed by the Russians at the end of the 19th century for coastal defense. 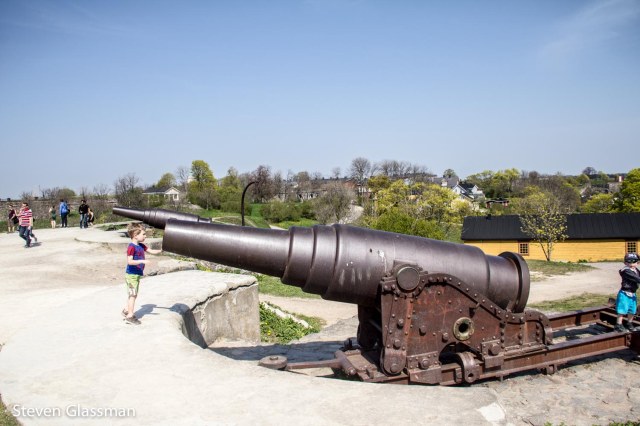 Plus it looks a tiny bit like the Shire. 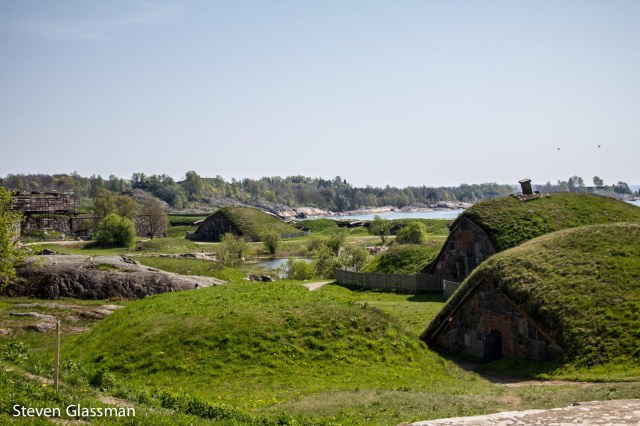 I didn’t manage to see the Vesikko while I was there  Vesikko is a Finnish submarine built in the 1930 for World War 2.  It has been restored and set up as a museum.  Regrettably, I didn’t find the Vesikko, but I did spend quite a while on the defensive wall of the fortress. 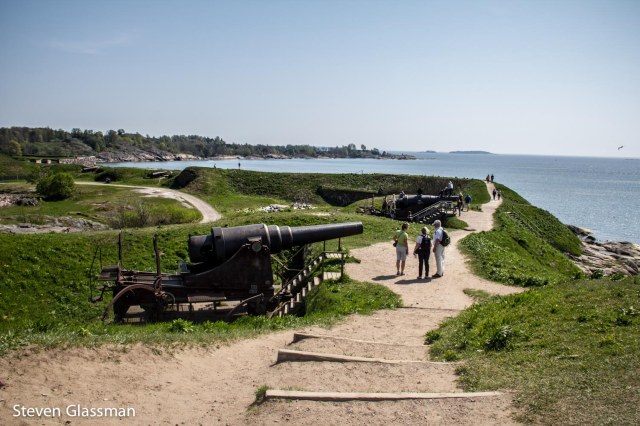 The original structures from 1748 still stand and can be explored. 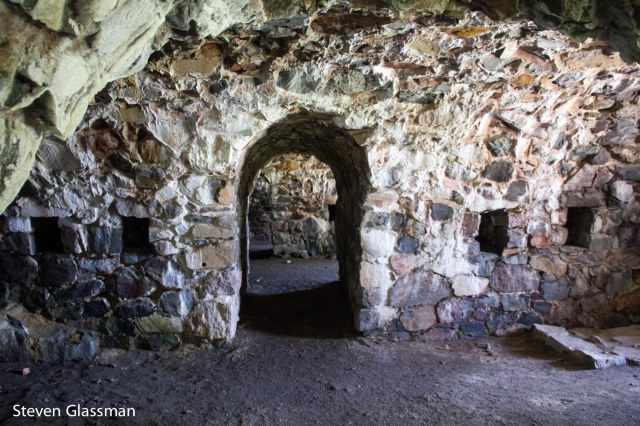 There are people in period costumes all over the Fortress museum area. 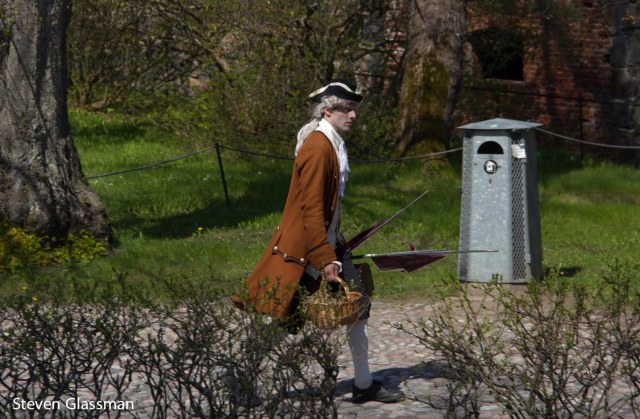 The Suomenlinna Church was a Russian Orthodox garrison church in 1854.  In the early days of Finnish independence in the 1920s, it was converted into an Evangelical-Lutheran church.   The steeple still operates as a lighthouse for air and sea traffic. 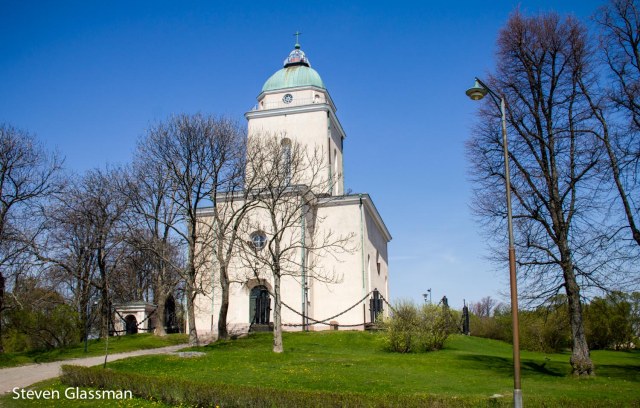 Katajanokka as seen from the ferry back from Suomenlinna. 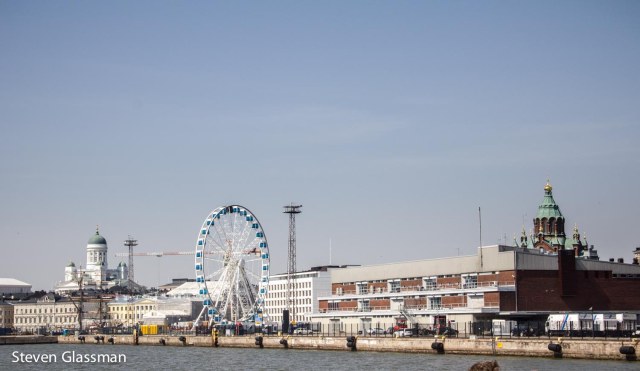 Have you ever been to Helsinki or Suomenlinna?