Perhaps one of the single most touristy things that I did in Japan was to go to the Tokyo Robot Evening Cabaret Show in the Kabukicho entertainment district of Shinjuku. This was the single most over-the-top show I’ve ever seen, without exaggeration.

It was on my walk to find this attraction that I spotted Godzilla on the Toho building.   I also liked the Taito Station building’s lights.

I think that the people behind the Robot Cabaret Show had a brainstorming session to figure out what Americans would like, and then they put all of it into the show.  All of it.  Very colorful signs?  Check. 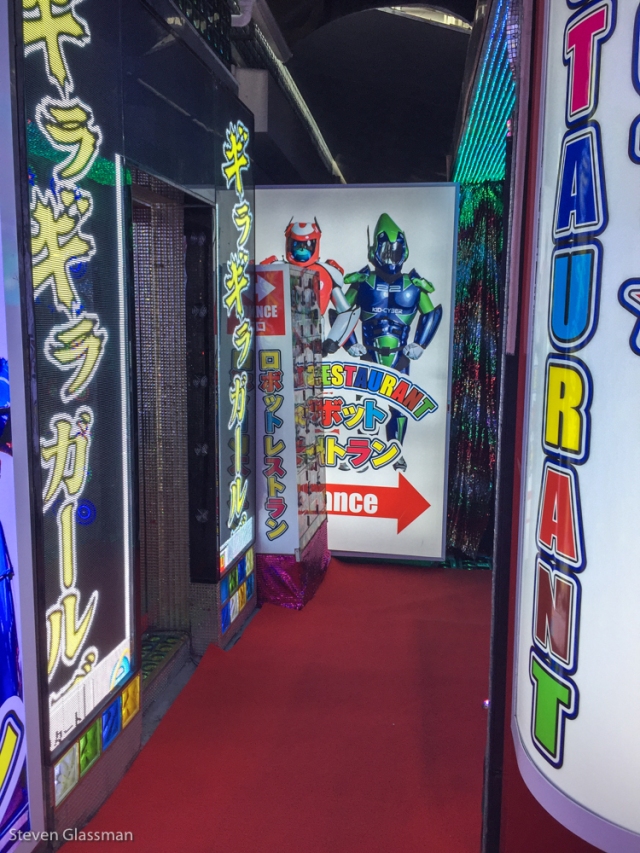 A Daft Punk knockoff band in the waiting lounge before the show?  Check!

A waiting room that looks like Las Vegas drank too much Absinthe and threw up all over the ceiling?  That’s a big check!

Each admission to the show includes a ticket for a single drink.  I chose Ninja Lager, because it had ninjas on the bottle.

After a little while, you are seated for the 90 minute show.  First up, Taiko drums! 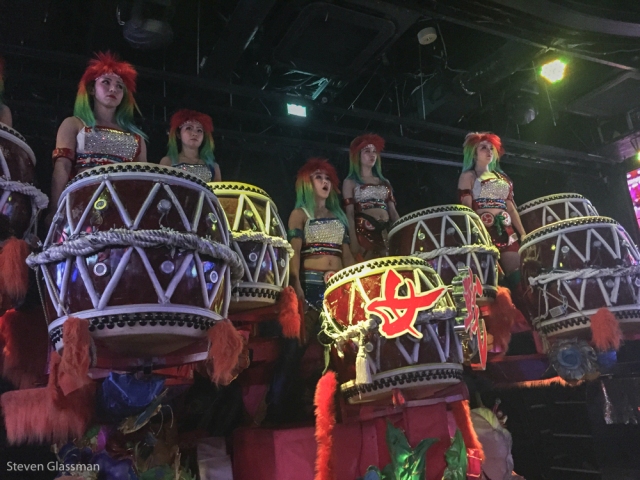 …with lots of led lights, naturally. 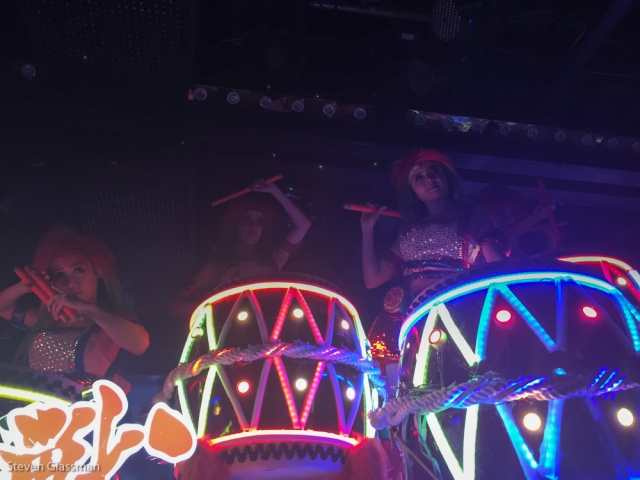 It wouldn’t be Japan without a dragon, right?

I think these guys were supposed to represent samurai warriors, but it wasn’t ever clear to me.

Elemental girl riding a dragon…. because why not.

She dismounts the dragon and fights the bad guy with a giant hammer thingie.

Next up, a spider queen, I think.  You can tell because of all the extra arms.  And the giant spider.

We can’t leave the giant sharks out of it.   They do their part in chomping the bad guys. 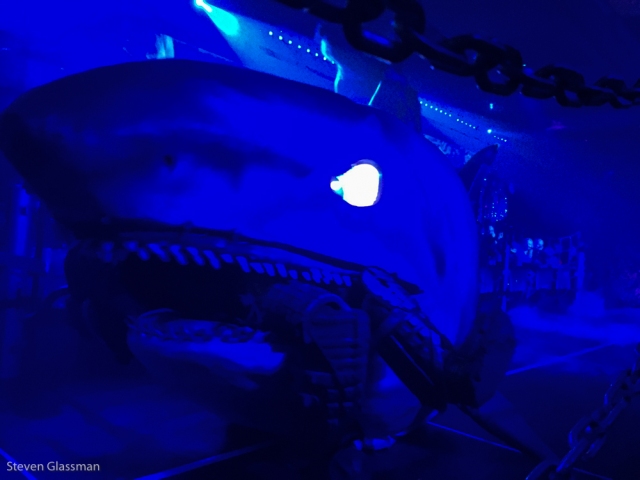 Plus giant snakes.  I think the point was supposed to be that nature defended itself.

Next, for some inexplicable reason, extremely creepy clowns!  Check!

The Taiko drummers have returned with a regular drum set. 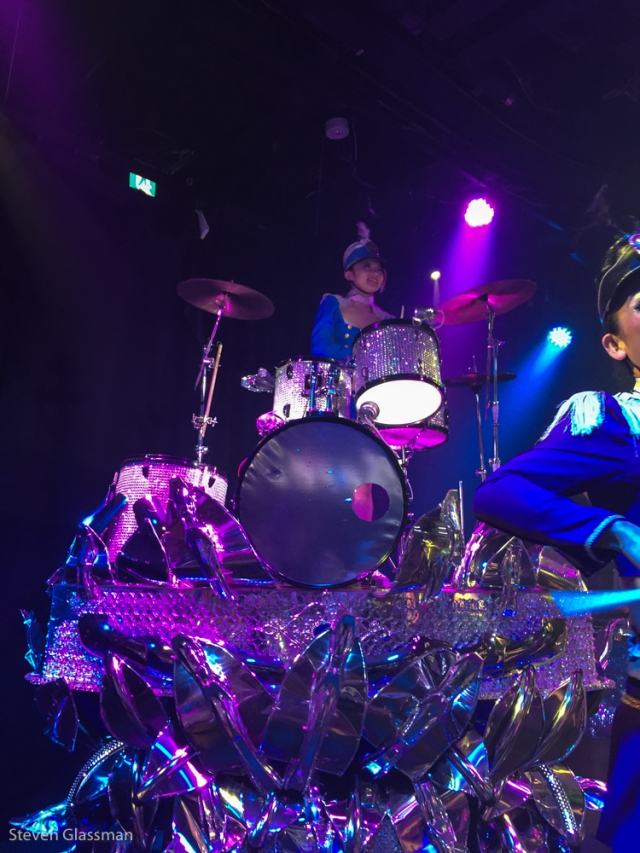 In the second half of the show, we get more robots.  Lots more. 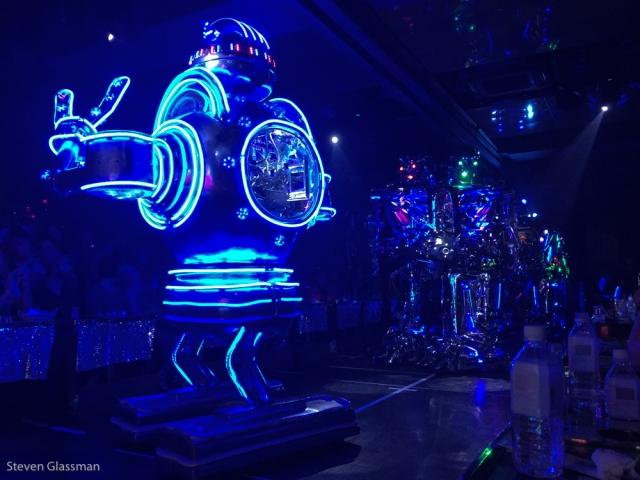 Plus neon dancers.  These were pretty cool, actually.

Just when you think it can’t possibly get more ridiculous, the Superman logos start to appear.  On the dancing girls.

On the robot with the clown afro wig. 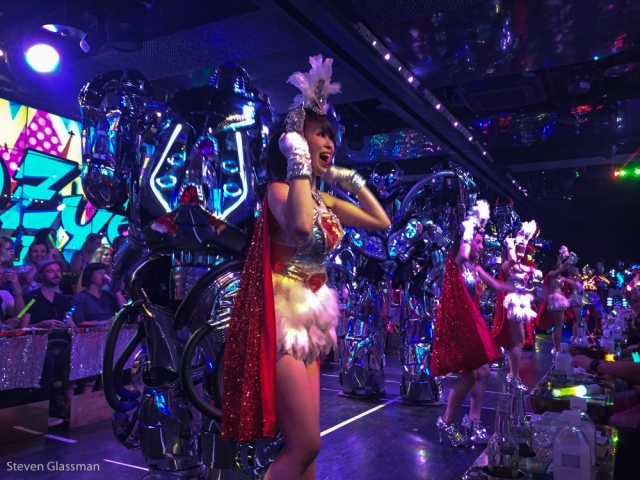 The robots and the Superman dancing girls are living in harmony now!

The screens on the robots all have the Superman logo showing up on a field of stars now.

Robot Superman himself does a fly-by, to shower his blessings of superness on the dancing girls and robots below.

…and suddenly, it’s Superman logos everywhere!  Even on the walls behind the audience! 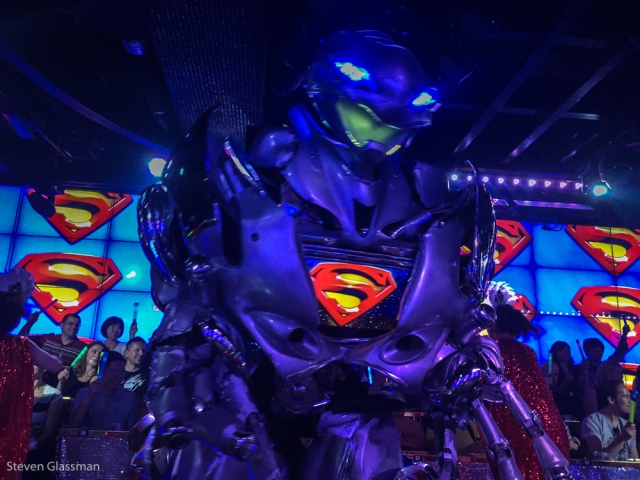 Would Robot Superman win in a fight against Kung-Fu Panda riding a Giant Cow?