Given my well established love of very tall places, it is probably no surprise to anyone that I pointed out the view from Mori Tower in my Star Wars Visions post and the view from Granpark.  Mori Tower is the 12th tallest structure in Japan, and Granpark is the 25th tallest.

In Tokyo, there are many, many tall buildings.  During my time in Japan, I made certain to stop at as many tall places as possible.  Three of the tallest in Tokyo are Tokyo Tower, Tokyo Skytree, and the twin observation decks of the Tokyo Metropolitan Government Center.    This post is about my visits to these three.

I started with Tokyo Tower.  Tokyo Tower is painted white and international orange, the same color as the Golden Gate Bridge in San Francisco.  This Eiffel Tower inspired structure was built in 1958, with a total height of 333 meters.  I visited the tower on an overcast day, approaching from the Akabanebashi station of the Metro. 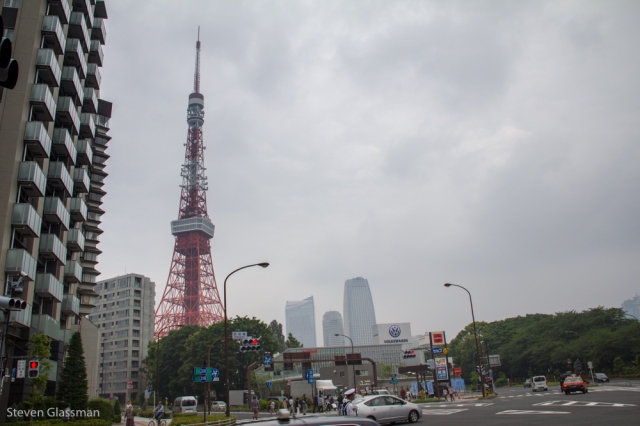 It is not at all clear to me why Older Brother has a bandaid on his head.

Inside the tower, there are many shopping and tourism opportunities.

A thick glass floor is set into one area of the tower so that you can reach the parking lot in a hurry if you need to.

From the observation level of Tokyo Tower, I had a clear view of the Zojo-ji temple, less than a kilometer away.   I visited Zojo-ji on the same day, but I’ll be putting those photos in a separate post.

Anything further out than this was too hard to see, because of the very hazy air.

Fans of the popular anime “One Piece” have a special exhibit to see on one of the lower levels of the tower.

Distant viewing was useless during my visit because of the haze, but that didn’t stop other people from visiting.  The sign over this man’s head is pointing to Tokyo Disneyland, which I will also cover in a later post. 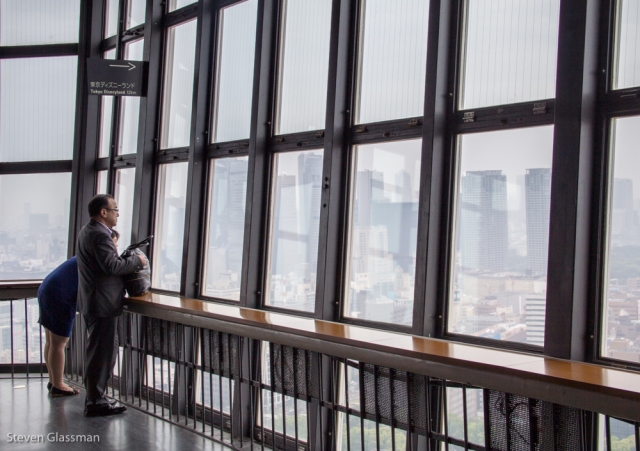 The next tower in this post is Tokyo Skytree.  To go there, you will most likely see the Tokyo Skytree station, which has an advertisement for a Moomin Hosue Cafe.  I never had a chance to find the Moomins, but I wish I had. 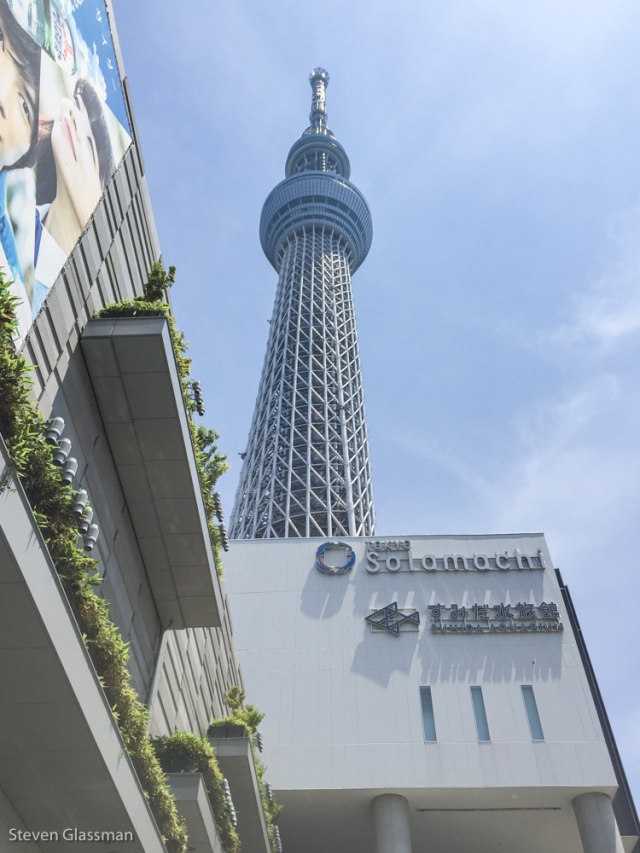 I waited for a sunny and clear day for my first three attempts to get into Skytree.

On the first try, I arrived later than I had planned and the line was insanely long.  I parsed several hours of waiting, so I opted to try again on a day that wasn’t a weekend.

On my second attempt, the line was also too long.  I needed to get to work, so couldn’t stay.  I decided to try to get there much earlier in the morning, closer to the tower’s opening time.

The third attempt was closer to successful-  I arrived much earlier in the day, and the lines were not so long.  However, the tower’s elevators had been closed due to high wind.  Strike three.

After my first three failed attempts to get into Skytree, my manager told me about the special foreigner line which is designed to allow tourists to bypass the longer lines by paying a slightly higher rate and showing their non-Japanese passport.  This turned out to be moot, though-  on my fourth and final attempt to see Skytree two days before leaving Japan, the weather was overcast and hazy so the lines weren’t very long anyway.

Skytree has mascots, of course.  The girl is called Sorakara-chan.  I’m not sure about the dog or penguin. 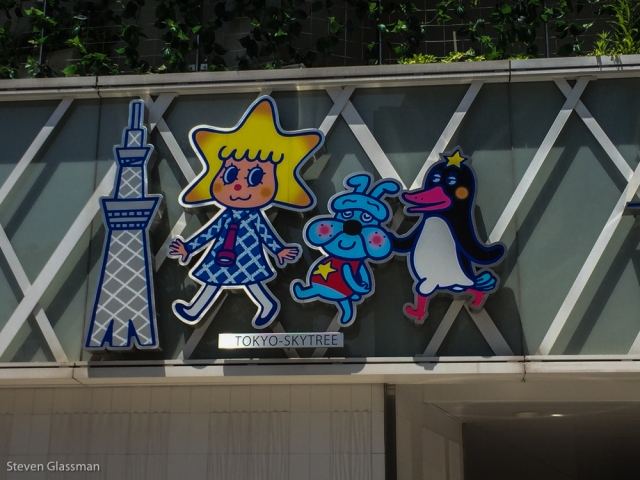 Tokyo Skytree has a glass floor panel as well.  This is definitely not for people with acrophobia.

Despite the haze, you can still see Tokyo Tower in the distance, nesteled in amongst some other very tall buildings. 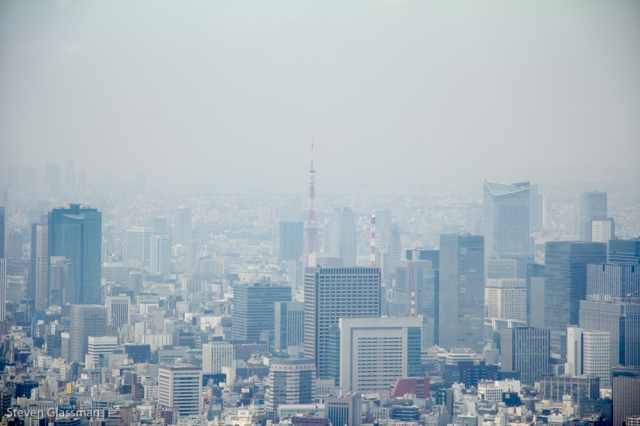 The view was great, but I wish I’d managed to get up here on a clear day.

My third and final tall building for this post is the ninth tallest structure in Japan.  The Tokyo Metropolitan Government Building in Shinjuku is split into two separate towers above the 33rd floor.  The elevators to the observation level are free, which was a nice change after spending money at Tokyo Tower and Skytree.

The day before I visited this building, it had rained a great deal.   There were moderately high winds, which blew out much of the haze from my other tower visits.

In fact, the air was so clear over Tokyo that I was able to catch sight of Mt. Fuji!

Don’t be deceived by my amazing camera zoom, though-  Fuji-san is still a long way from the center of Tokyo.  This is the same view as the previous picture, with significantly less zoom.

A longer view of the river.

Tokyo is a very dense city, with many very tall buildings. 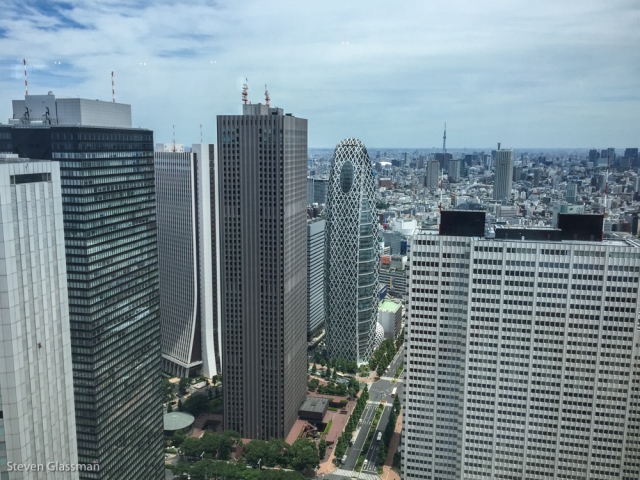 They still manage to squeeze a lot of green spaces in,though.  I think this is Shinjuku Central Park.

4 thoughts on “Tokyo’s Tallest, or Getting High In Japan”