Last weekend, while I was about 85% recovered from the touch of cold-flu-whatever, I had my first guest visit from the US, my friend Lorrie. We’re both fans of movies and television, so we decided to visit Bavaria Filmstadt, a working film and television studio on the outskirts of Munich. I had only just learned of the film studio’s existence, but I’ve seen a lot of their work. I suspect most of you have seen stuff from Bavaria Filmstadt too.

This studio has been active for decades, and many well known titles were filmed here. Here is just a few that filmed here:

To get to the studio from the Hauptbahnhof, we first took a U-Bahn for part of the way, and a Tram for the last part of the trip. The tram deposits you within walking distance (about half a kilometer) from the main gate. The studio is clearly marked. This first sign pointed us in the right direction, and a series of smaller signs told us when we got 400 meters away from the main gate, 300 meters away, and so forth. 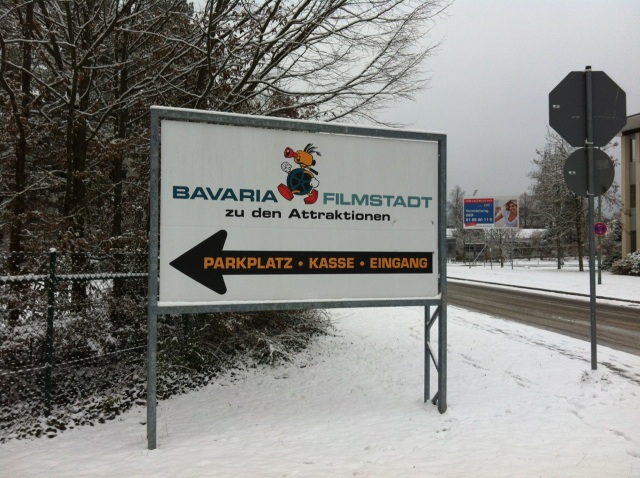 At the main gate, you have to select your experience- there’s a tour, a “4D adventure,” and the Bullyversum. The Bullyversum is a separate section related to the films of Michael “Bully” Herbig, a comedic actor from the region who has become famous for his parody movies. I actually have the sci-fi one, “Traumschiff Surprise: Periode 1” on DVD. Here’s the trailer for that, just to give you a sense of what the movie is like:

We elected to do the tour and the 4d movie, but not Bullyversum, since a) the tour was in German and Lorrie speaks only English, b) she had never seen any Bully movies, and c) neither one of us was particularly interested in that part of the park. As it was, the tour and the 4d movie would take up about two hours of daylight, leaving us with little time to see anything else in Munich.

Once we paid our admission and tour fees, we had a short wait for the tour to begin. This gave us a chance to pop into the studio’s McDonald’s for a quick beverage- tromping around in the snow is thirsty work.

We also went into the studio’s gift shop, which was McDonald’s adjacent. There were three things I nearly purchased. The first was a plush Falkor from The Neverending Story. He was so soft!

The second thing I nearly purchased was an Auryn, also from The Neverending Story. After all the trouble they went to to find the Auryn in the movie, it turns out there’s an entire box of them for sale in Munich!

The third thing I nearly purchased in the gift shop was a uniform shirt from Traumschiff Surprise. They were surprisingly high quality, and there’s something fun about a dayglow color like that.

After a few minutes wandering around the gift shop, the group started to gather for the tour. We moved outside to be with that group, and to look around at some of the scenery in the waiting area. There was a large model of the submarine from Das Boot, as well as a section of the spacecraft from Enemy Mine.

Additionally, there were some replicas of things used in The Neverending Story. Seen here are the Rockbiter and the Racing Snail:

Before much longer, it was time for the tour to begin. Parts of the tour went into hangar style buildings, but a great deal of it involved being outside in the snow. In hindsight, this was not an ideal winter activity.

The golden carriage below is from a current theatrical release, Ludwig II, which is about King Ludwig the second of Bavaria, the man responsible for many impressive buildings and monuments all over Germany. 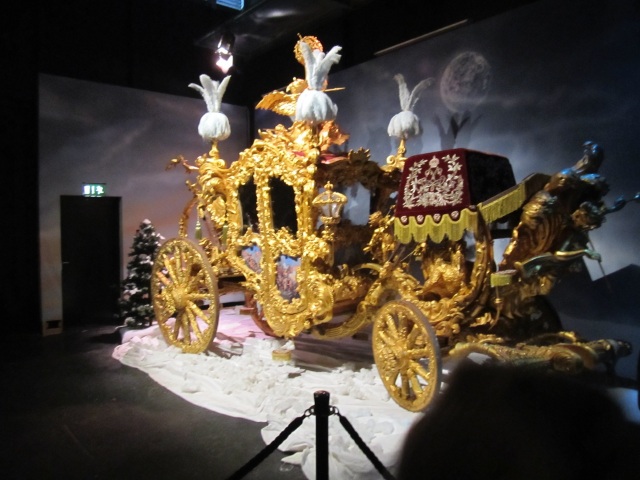 One part of the tour allowed someone to re-enact a scene from a popular German television show.

One of the big set-pieces of the tour was the Das Boot section. There were numerous models of the submarine in various sizes, including a life-sized tower.

In addition, you can walk through the interior of the sub. This was originally done in three side-by-side sections on a gimbal so that motion could be simulated realistically. It has now been layed out in one single track that you walk through. You can see engineering, sleeping quarters, and the conn with a periscope. This is not for the claustrophobic.

After Das Boot, the tour went outside again to show us the viking ship from the “Vicky The Viking” movie, Wickie und die starken Männer. (Literal translation: Vicky and the Strong Men.)

Vicky The Viking is based on a popular cartoon. Here’s some video to show you the differences:

Finally, we got to the section that I was most interested in- The Neverending Story. They had a lot of behind the scenes imagery, like a shot of the Swamps Of Sadness set and this giant poster photograph showing puppeteers working on the Falkor model with the Rockbiter standing by:

Also present were the original matte painting of the Ivory Tower, and the models used for the Southern Oracle. 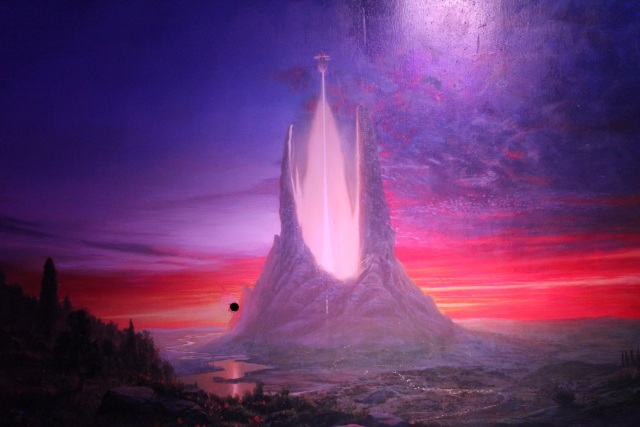 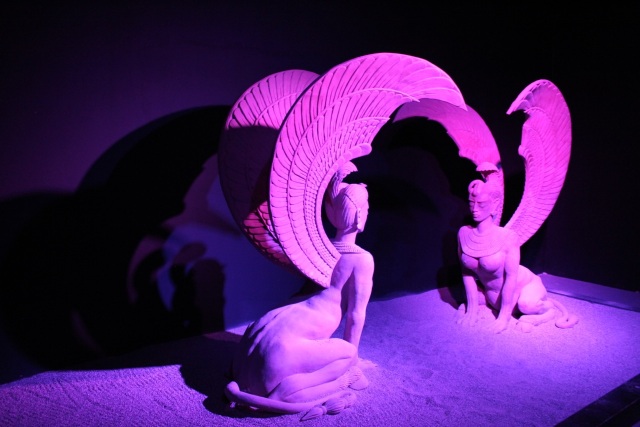 My favorite part, naturally, was the giant bluescreen Falkor. Obviously, this was put in place for the children on the tour:

…but really, I’m just a big kid, and I couldn’t resist a shot. Plus, as a bonus, you can see in the monitor behind my hand what it looked like with the bluescreen composite. 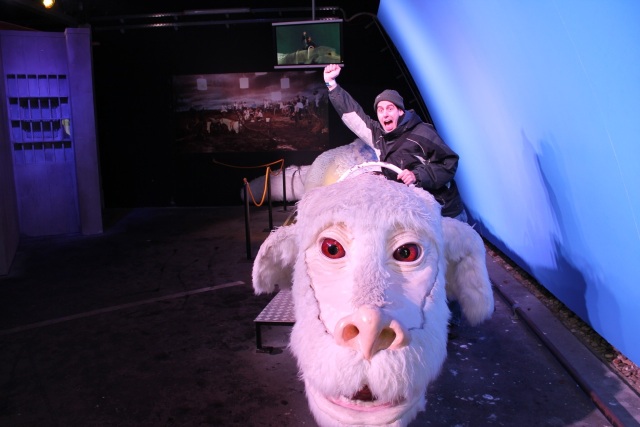 The 4d movie, when we got to it after the tour, was a full experience ride with 3D glasses that lasted about five minutes. It was entertaining, but not as cool as the life-sized Falkor model.

Are any of the movies or shows produced at Bavaria Filmstadt in your favorites?