I’m on an August Break from my regular blogging schedule. Here’s today’s picture.

License plates in Europe are kind of fascinating to me.  Within the European Union, modern plates (issued after 1994) typically look like the one pictured below, but with a few key differences.  They all have the circle of stars that represents the EU, but there’s a letter underneath which represents the source country.  This plate is D for Deutschland, naturally.  There’s also F for France, A for Austria, I for Italy, and so forth.  Plates from Switzerland look different because they aren’t actually EU members; they go their own way.

Here in Germany, the first letter (or grouping of letters) represents the city where the plate was issued.  Bigger cities tend to have single character codes, such as B for Berlin, L for Leipzig, M for Munich, and so forth.  The R below is for Regensburg.  Smaller cities have multi-letter codes.  Nearby Schwandorf gets the amusing license code SAD, which leads to all kinds of “sad” plates making me giggle on a daily basis.  Immediately after the city code, there are safety inspection and registration stickers, and then some other letters and numbers that are unique to each vehicle. 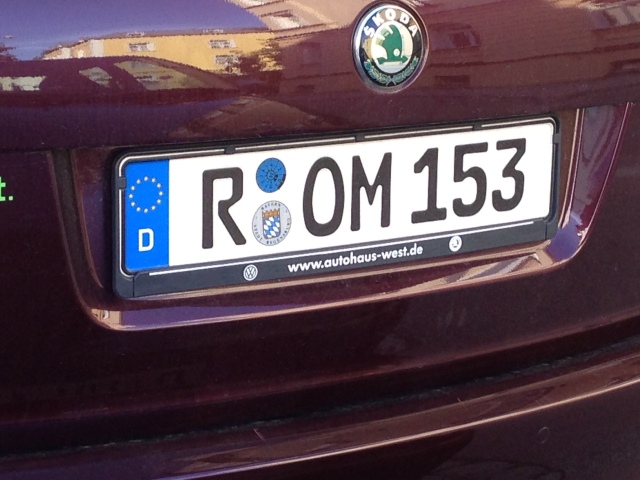 Do you think I’m a little nuts for being this fascinated by something as mundane as license plate configurations?