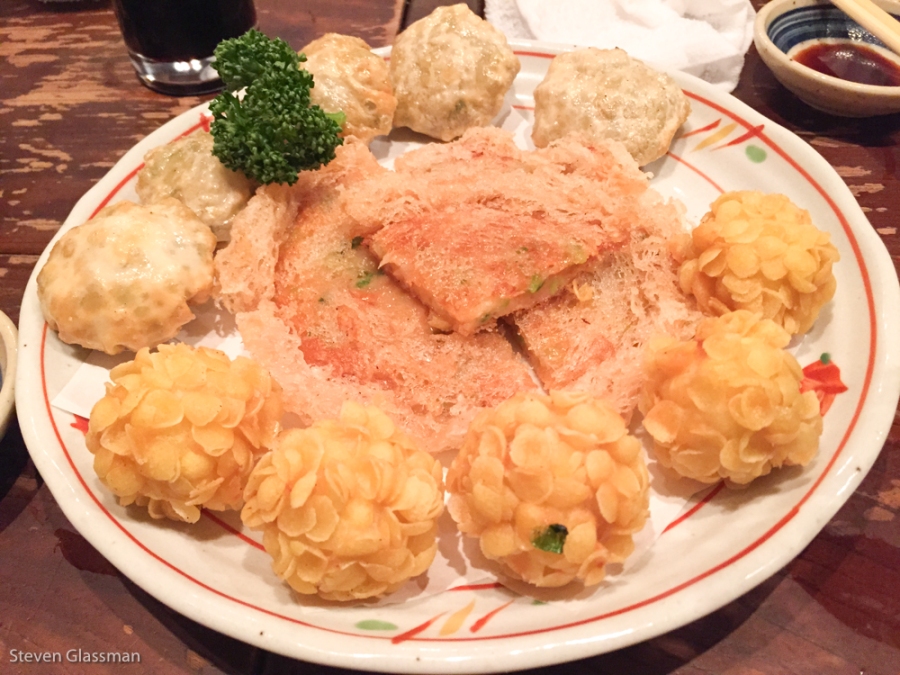 For an officeworker in Japan, the nomikai is a regular part of life.  A nomikai is a food and drink party held immediately after the work day ends.  They are most often held in restaurants or izakaya, usually with everyone seated at one large table.

The traditional nomikai lasts roughly two hours, and it’s not uncommon for people to move on from there to a nijikai, or second party, to continue drinking.    Some of the participants will then go on to a sanjikai, or third party.  Those who go to sanjikai frequently miss the last train, and some of them will keep drinking almost until morning.   There were several instances during my visit in which I learned that my colleagues were quite hung over from sanjikai.

There was a nomikai held at the end of my first week in Japan, partly to welcome a batch of new employees in the group and partly to welcome me to the Tokyo office.   Every picture that follows is the food from the nomikai I attended.  I figured that a post comprised entirely of food would be very appropriate as we head into the Thanksgiving holiday here in the US.

The first photo is a small appetizer of a sort of fish flake custard dish. 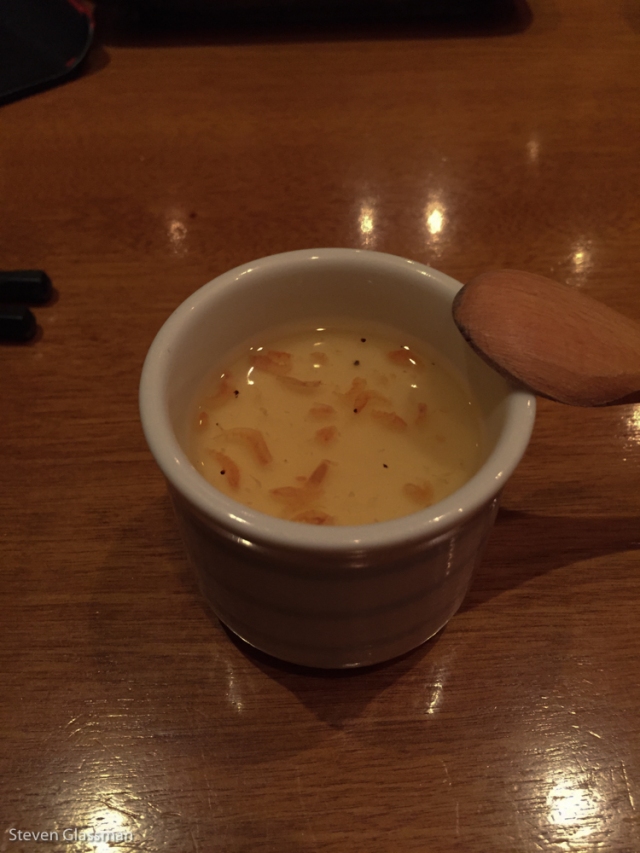 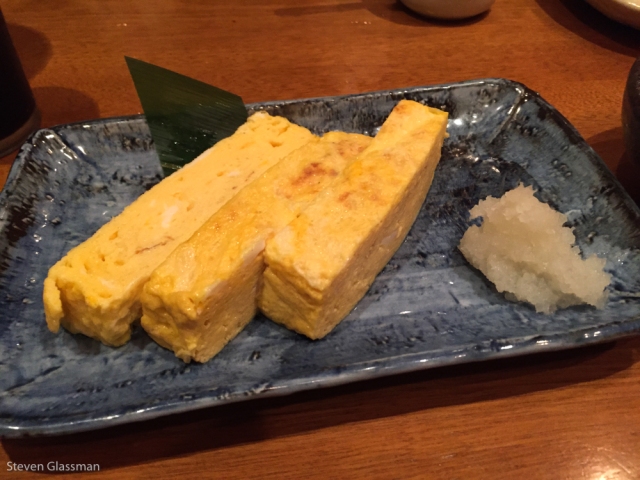 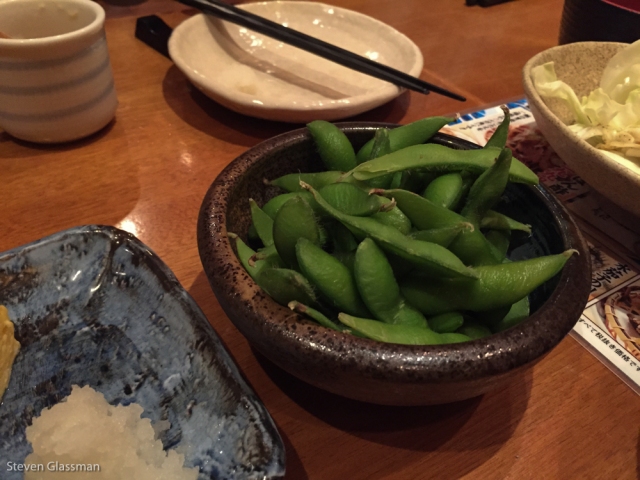 Cabbage leaves in a sesame dressing.  So, so tasty. 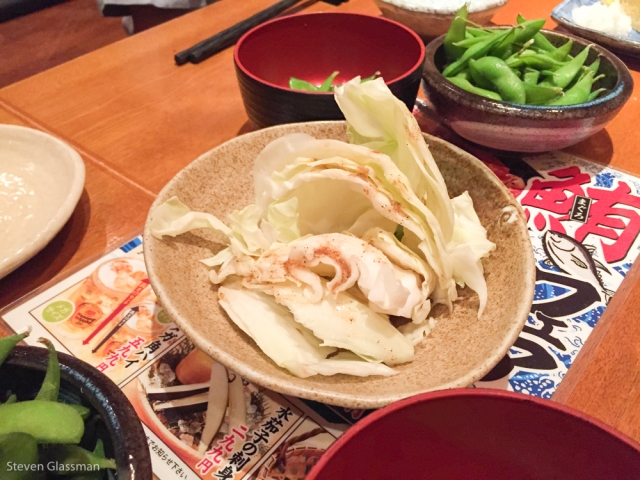 The thing about asking Japanese colleagues to identify a dish is that they will often just answer that it’s meat.  If you’re really lucky, they might specify which animal the meat came from.  I was not so lucky. 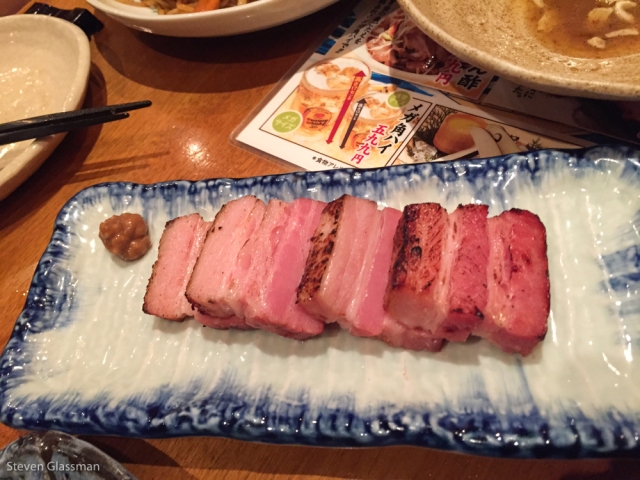 These noodles were incredibly delicious. 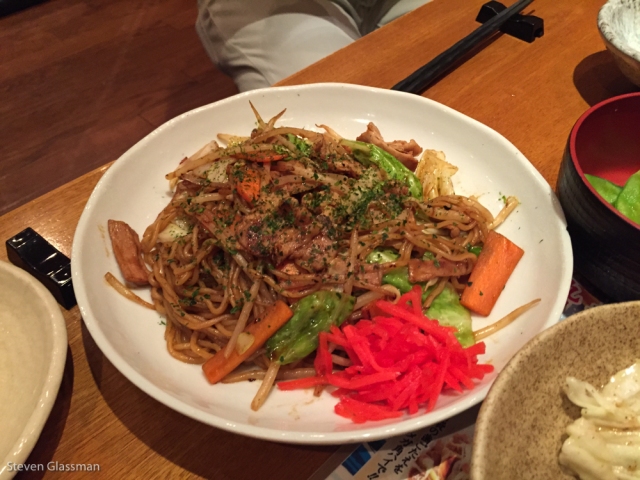 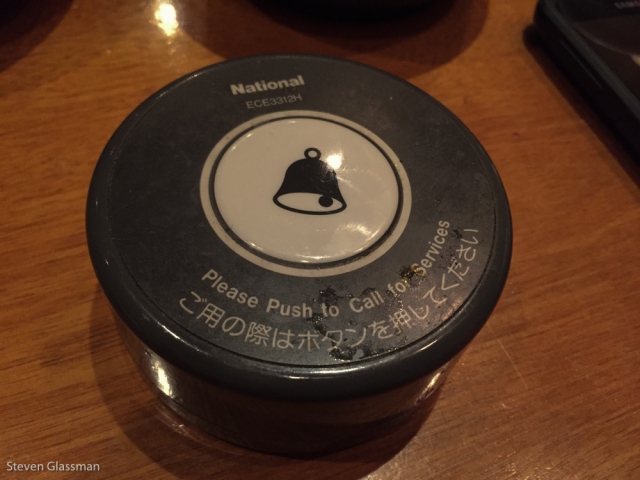 This is fried fish bones.  I did not think I was going to dig this, but it was crunchy, salty, and surprisingly delicious. 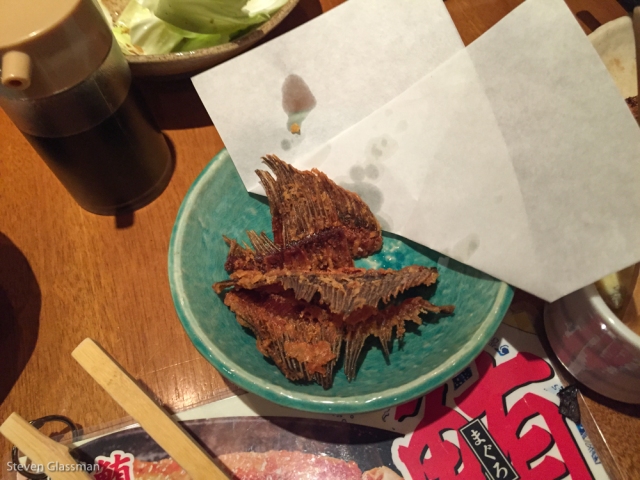 Leafy stuff in a sesame dressing is one of the most delicious foods on the planet. 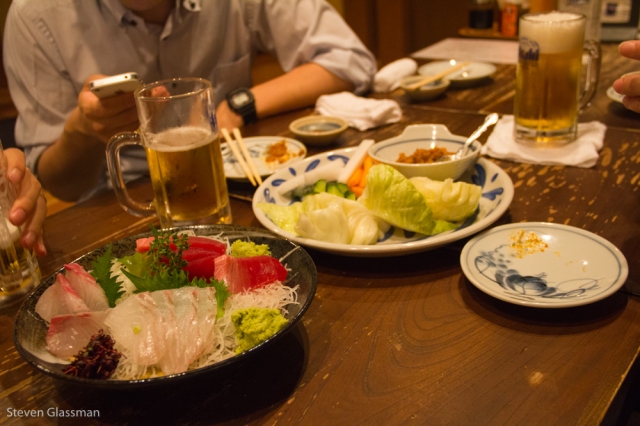 I’m pretty sure this is two types of fish.  Someone told me that the pale one was blowfish, but I’m not certain I believe them. 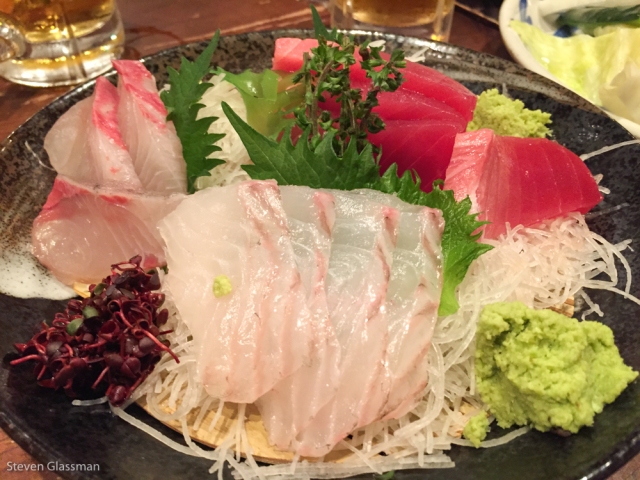 Various fried and breaded seafood things.  The round balls that look like they have cornflakes on the outside were especially delicious. 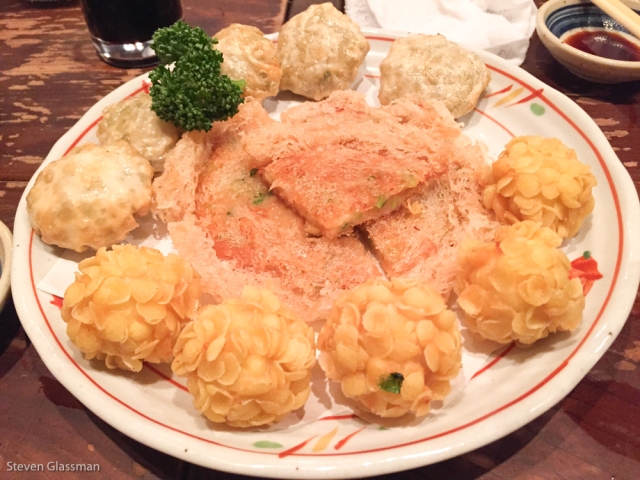 Remember a while back when I mentioned the Okonomiyake?    This was kind of like that, except huge and portioned out like a big deep dish pizza. 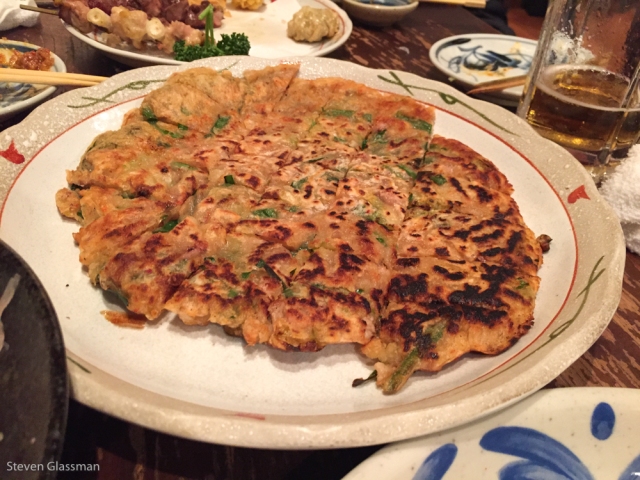 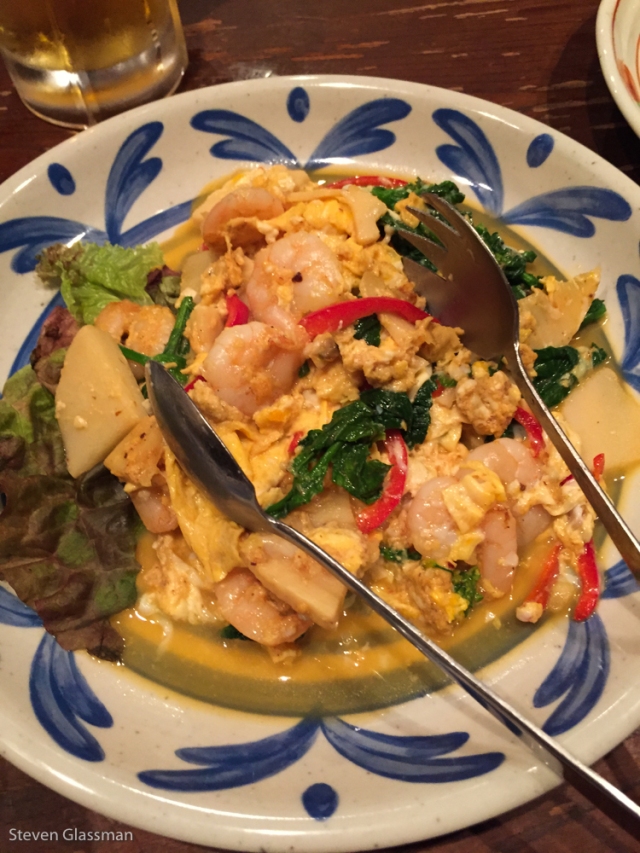 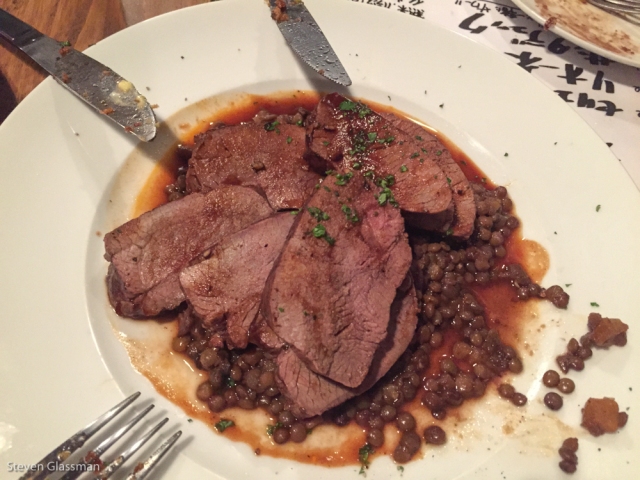 What traditional Nomikai would be complete without french fries? 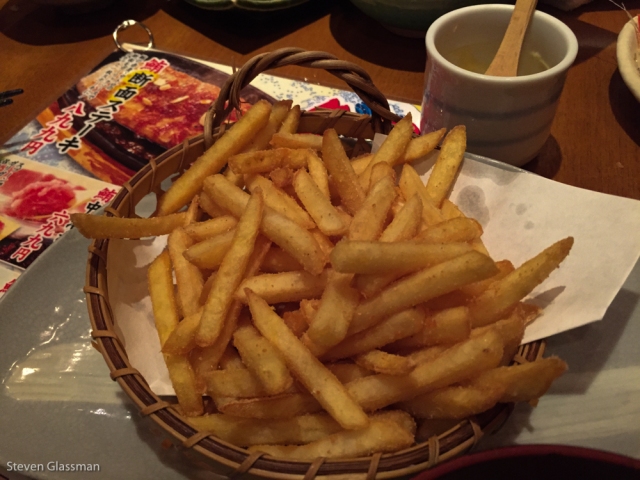 By the time we finished the Nomikai, I was super full of all manner of delicious food.

Of all the food you’ve eaten on trips, which item was the most unusual to you?